I am always reading about these wild stories that people have on their travels. From partying and drinking with once strangers now turned friends to being invited by locals to eat dinner in their homes, I’ve always thought it sounds so magical and fun and exciting. I think to myself, I want to be like that!

But then reality sets in. I know bad things can happen too and I get scared. Can I trust these people or not? I’m also shy. I don’t really initiate conversations, and until just 3 years ago, I didn’t usually meet people while traveling. The more and more I do it though, the easier it gets. The more I’m choosing experiences that put me in a place where I can interact with others. I’m feeling more comfortable, and recently in Japan we had an awesome experience with some newly found friends.

When we went to Italy, we did a food tour in Rome. It was our first ever food tour and WE LOVED IT. I want to do one practically everywhere we go now! So when I received an email from Viator saying that a Tokyo Food Tour was currently discounted, I jumped on that deal immediately. This food tour was in the evening, and our guide Kiri was amazing. He was so helpful, kind, informative, and generous. Kiri took us to a restaurant to try yakitori (yum), a pastry shop, and a third stop to try Monja. 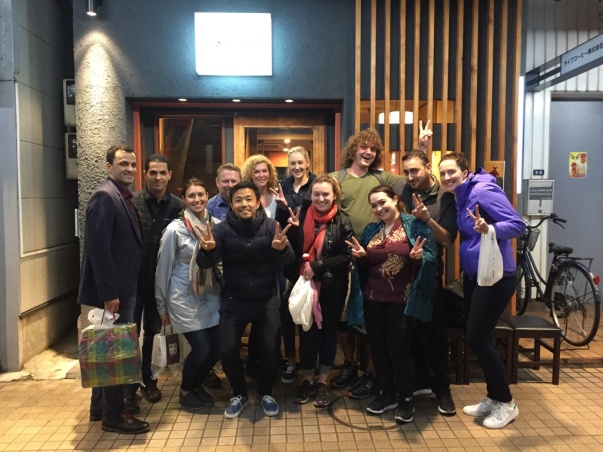 The food tour ended around 8pm. We were all in the train station, and William and I are under the impression that we are about to call it a night. We had talked to most of the people on the tour and really enjoyed their company. Then, the British couple asked if we wanted to go out and have a few drinks. I’ve already spent 3 hours with them and know they are awesome. They invited two Australian girls too. We had Kiri help us figure out what area we should go to, and how to get there by train. We ended up heading to the Roppongi area in Tokyo, which is known for having a ton of restaurants, bars, nightlife, shops, you name it. Once we arrive though, of course we don’t know which one to pick and just keep aimlessly walking down the street. We see a patrol officer (who very clearly does not look Japanese, so we hope he speaks English), and ask him for advice. He recommended a British pub right across the street. So we try it!

The pub was crowded, tiny (like the size of a bedroom), and we find a little spot at the bar with 3 chairs where we all huddle around until a table becomes available. We can’t really read the menu so most of us just select drinks based on pictures (or maybe that was just me). I had something that was neon green, but tasty. We take pictures, we eat the free popcorn on the table, we drink, and we are merry! The British couple decide to buy the round of drinks, and we just think it is too funny that British people are buying us drinks in a British pub in JAPAN. Then we come up with the idea…..maybe we could find an Australian and American themed bar too. 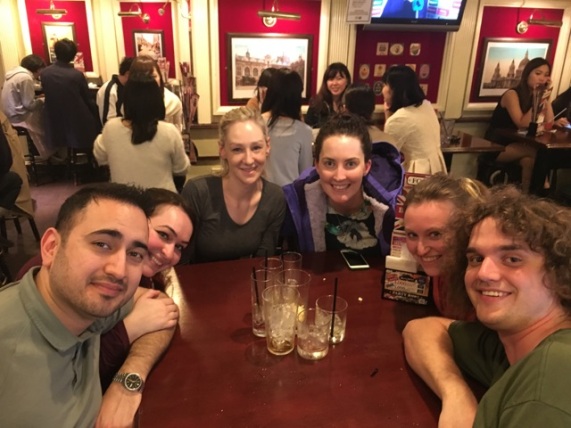 Turns out….there was an “Australian” bar 5 minutes away! And off we go to find Quest. We have to go up the elevator, and we see a regular looking bar. We see nothing Australian about it, so we ask if this is the right place. The Japanese man says, “Yes. Good day, mate!” with a pretty horrible accent. I guess we are here! The Australians proceed to go around the entire bar to actually find anything Australian. They only found 2 things (and this bar was quite a bit bigger than a tiny room). The Australian girls decide to buy this round of drinks, and find a lone American at the bar named Steve that they invite over. Steve informs us that the British Pub we just came from is where men go to find their ladies of the night. Whoops. People keep coming over and introducing themselves to us (we kind of stand out). We got to see a wedding party come in and have a blast. Then we work on finding the final bar location of the night….an American bar. It can’t be that hard, right? 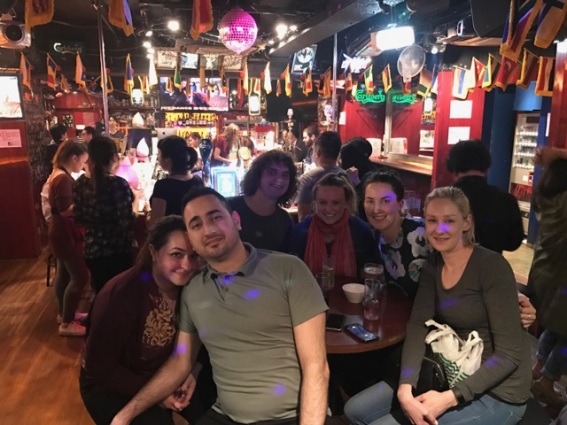 Wrong. We couldn’t really find anything! We did find a Texas themed bar, but it was about 22 minutes away by train. We needed something closer as it as getting pretty late. Eventually, after about 15 minutes of googling I find something called The Elvis Bar. There is very little information, no picture, but it was only a 1 km walk away. And Elvis is a very American icon so surely it counts! The group is down so we make the walk, and find that Steve decides to tag along.

We get to the place labeled Elvis Bar on Google Maps and find nothing. Like I said, I’m shy and don’t like asking for help. I easily give up mentally. However, the British man is very friendly and great at talking to and approaching people. He finds a couple of Japanese men that look like hard core rockers with their spiked hair and leather jackets (may be exaggerating a little) and asks them for help. They don’t speak English so Elvis dancing and singing impersonations commence. Eventually, we are on the same page and these Japanese men start running around the whole area with our phones while the 6 foreigners follow aimlessly. I must give them credit – they were absolutely dedicated to helping us. I was already ready to give up. Three from our party went down the street to another local bar to see if it would work or not. Eventually, the men start asking other Japanese people for help. We come to the conclusion that the Elvis bar was at the building we were originally by, but it was up the stairs.

The people from our group that had split had rejoined us saying the bar down the street wasn’t really what we were looking for. So we all cram into the elevator, thank the men for their help, and go to the floor as instructed. We get there, and find nothing resembling an Elvis bar. We ask the lady greeting people on that floor, and she says we have to go down one level. Back to the elevator we go! Finally, we end up finding a bar….but it has low tables on the floor, carpets, hookahs, and we come to find out it’s Iranian. Not Elvis. We ask the people where the Elvis bar is. Turns out, the Elvis bar USED to be there.

We are tired at this point. William and I rationally decide that America is a melting pot of culture, so an Iranian bar is an American experience. We take off our shoes and gather around the table on the carpet on the floor. And as the Americans, we attempt to pay for the whole round of drinks. Of course, it’s just our luck that the bar we chose was about twice as expensive as the other places. The others in our party were generous and kind though, recognizing that and pitching in. In the end, I think all groups came out about even.

I would also like to point out how cool this last bar was. The servers were really friendly and seemed happy to have us. Steve and one of them bonded over being from Chicago. And we were the only ones in there which was kind of a nice way to end the night.

The others take the cab, but William and I decided it was close enough for us to walk back. Of course it felt like the walk took forever, we may have slightly regretted it, and we wandered through nightlife/club central where all these French men kept hustling us to come into their bars. It was definitely exciting. What is a William and AK vacation anyway without overestimating how close or far something is.

We got a good taste of local Japanese night life, we made new friends that I love following on Facebook, and this ended up being one of our favorite experiences of the whole trip. People are amazing, and connecting with people is was one of the best ways to spend your time. 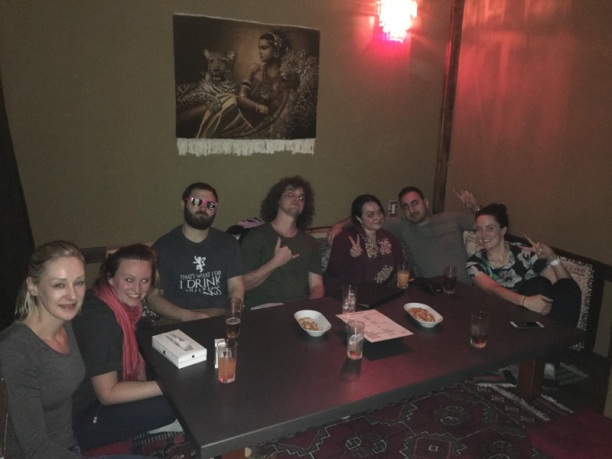 I get lost a lot in foreign countries. I love to dance. I like to do basic math in my spare time. I am a planner. ENFJ. I am a great wife sometimes. I probably sleep too much. I have a heart for teaching. Mostly I dream about my future travels.

My hope is to share my stories, advice, hopes, ideas and thoughts on traveling to you, and that it makes a difference for you. No matter how small of one.
%d bloggers like this: